Canadian bow maker Emmanuel Bégin began his training at the age of 14 with his father, Louis Bégin, in Montréal. He moved to Lille, France to work with Yannick Le Canu for several years, before returning to Montréal to open his own workshop. 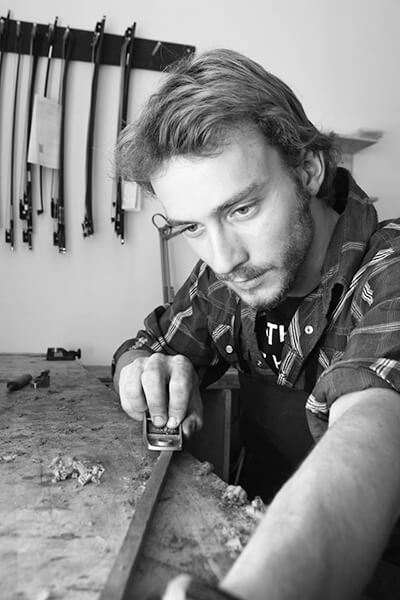 Bodach-Turner began making bows in 2000 at the University of New Hampshire Violin Craftsmanship Institute under Lynn Armour Hannings. Through the Violin Society of America Bow Making workshops at Oberlin College, he has worked with some of the finest bow makers in the world today.

Bodach-Turner holds a Bachelor of Music in Music Recording from Ithaca College and performs regularly with several area orchestras and chamber groups on the double bass. 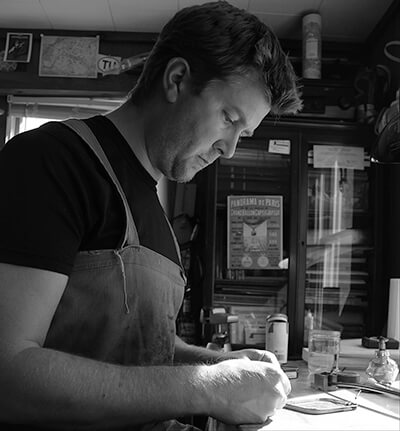 Jon has held positions at some of the top violin shops in the U. S., and currently rehairs, repairs, and restores bows for Carriage House Violins, while maintaining his career as a bow maker. 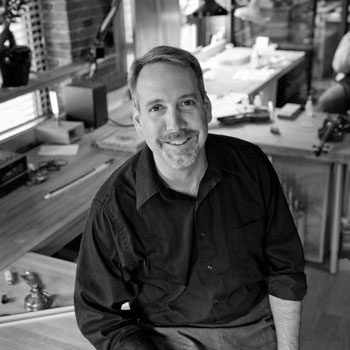 Working in Boston’s music community since 1982, Thomas Dignan has studied and restored bows made by the most influential makers of the 19th and 20th centuries, and built his own award-winning models. He has received the highest honors for his bows with 17 awards from international competitions, most notably gold medals from the Violin Society of America in 1986 and 1992, as well as the International Society of Bassists in 2003. His bows are owned by professional string players worldwide.

French bow maker Eric Fournier discovered bow making at an early age. In 1998, he began making bows under the tutelage of Stéphane Müller in Toulouse. He has trained with many other prestigious makers, including Edwin Clément, Gilles Duhaut, Eric Grandchamp, Yannick Le Canu, and Georges Tepho, with whom he currently shares a workshop in Quimper, France. Fournier has won numerous awards for his bows, including two Gold Medals in the Violin Society of America competition of 2014 for a viola bow and a cello bow. 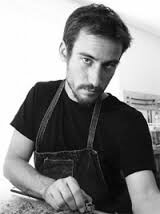 Swiss bow maker Pierre-Yves Fuchs is one of the most celebrated bow makers working today. He studied with Stéphane Thomachot, Gilles Duhaut, Pierre Guillaume, and Benoit Rolland, and established his own workshop in 1997.

His bows are in high demand among professional players worldwide and have won numerous awards at international competitions. In the Violin Society of America competition of 2004, Fuchs received the unprecedented honor of winning four Gold Medals: one for each of his violin, viola, cello, and bass bows, earning him the title of “Hors Concours.”

His bow making style is inspired by Peccatte, Maire, and Pajeot. 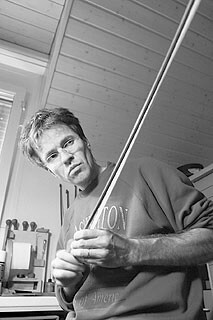 Éric Gagné worked for several years at Blaise Emmelin, first as an apprentice and then as an assistant. He then worked at Maison Bernard for Pierre Guillaume in Brussels, where he also trained in the art of bow restoration. He now has a workshop in Montreal where he makes his bows; he also works with the Wilder and Davis workshop where he restores and sells bows throughout Canada. 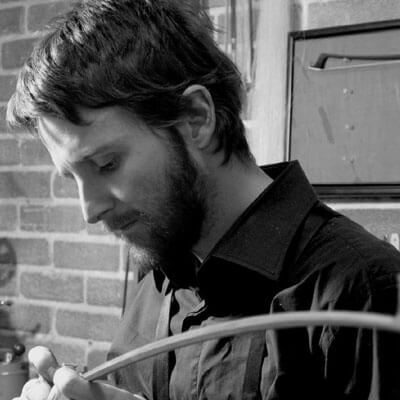 American bow maker Thomas Goering (b. 1957) trained in New York with William Salchow and David Samuels. After working for Jerry Pasewicz in North Carolina for several years, Goering returned to his hometown of Topeka, Kansas in 2005 to set up his own workshop, where he currently builds and restores bows. Goering frequently collaborates with leading international bow makers at the Violin Society of America’s annual summer restoration workshops at Oberlin College, and his artistry has been featured in a video produced by violinist Cristian Fatu. Goering’s bows have won numerous awards, including Certificates of Merit at the VSA competitions of 1998 and 2012.

German bow maker and restorer Klaus Grünke is among the most esteemed bow authorities in the world today. Grünke began studying in 1975 with his father, Richard Grünke (b. 1930), who had studied in H. R. Pfretzschner’s famous Markneukirchen workshop from 1946 to 1948. After working with Hans Weisshaar in Los Angeles from 1980 to 1982, Klaus returned to Bubenreuth to work with his father and brother, Thomas Grünke, also a bow maker. In 1996, the Grünkes founded the company Richard Grünke & Söhne, where they currently restore and build bows for clients all over the world.

Klaus Grünke developed his own bow models based on Dominique Peccatte, François Nicolas Voirin, and more recently, Nikolai Kittel. His bows have won the highest honors in international competitions, and he has served on the jury of numerous competitions. He is a member of Verband Deutscher Geigenbauer und Bogenmacher, Entente Internationale de Luthiers et Archetiers, and is a founding member of the International Pernambuco Conservation Initiative (IPCI).

At the Oberlin workshops, Eric learned traditional French techniques from Stéphane Thomachot and Eric Grandchamp, as well as English and German techniques from Tim Baker and Klaus Grunke, respectively.

Eric joined the staff of Reuning & Son Violins in 2002 to lead the bow repair and restoration department. His own bows are inspired by Pajeot, Simon, and Maline. Eric is a member of the American Federation of Violin and Bow Makers and the Violin Society of America. He has won several Certificates of Merit for Workmanship at various VSA and International Society of Bassists competitions. 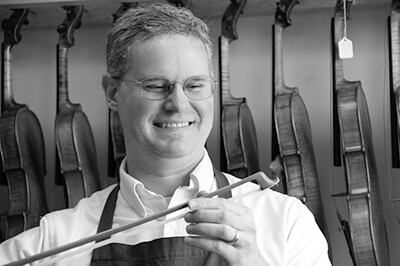 Li’s bows (stamped “Lee”) have won numerous prizes in international bow making competitions, including Silver Medals for his violin and viola bows entered into the China International Violin Making and Bow Making Competition held in Beijing in 2013. Based on 19th century French models, Li’s bows are praised for their elegance and tone production, and are owned by professional players across the globe. 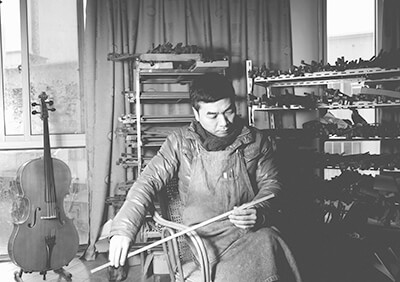 Rodney Mohr is one of today’s most prolific and celebrated bow makers. He has won numerous Gold Medals at the Violin Society of America’s bow making competitions, earning the title “Hors Concours,” and has served as president of both the VSA and the American Federation of Violin and Bow Makers.

In high demand as a maker and a teacher, Mohr is currently co-director of the VSA Oberlin Bow Restoration summer workshops, and hosts his own series of workshops from his studio in Ashland, Ohio, where he continues to build and restore bows. 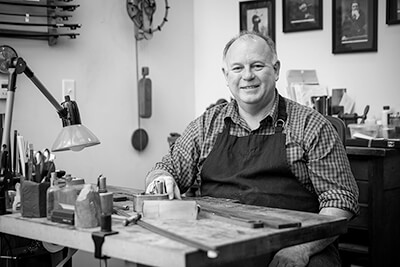 American bow maker Robert Morrow resides in Port Townsend, Washington, a town renowned for its bow making. Before working with bows, he was part of a community of Northwest Coast Native American artists, where he was known for his wood carving on traditional art—such as totem poles and masks—and credits this experience for training his eye in the details of fine wood working.

He studied bow making with Charles Espey, and currently builds his bows based on models by the classic French makers, including Tourte, Pajeot, and Lupot.

He has won numerous awards for his bows in international competitions, including five Gold Medals between 2004 and 2008 at the Violin Society of America, which has earned him the top honor of “Hors Concours” status.

His bows are owned by professional players throughout the world. 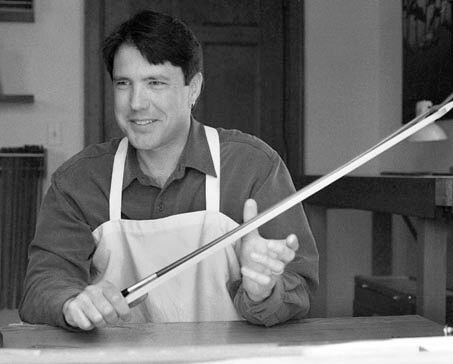 Contemporary British bow maker Paul Sadka (b. 1966) trained as a cellist and photographer before becoming interested in bow making. After studying with bow maker Noel Burke in Ireland, he continued training in Cremona, Italy, then worked in the south of France and Budapest. Sadka opened his own workshop in Budapest in 2000, before moving to Paris in 2004 to partner with violin maker Jan Bartos in Paris for several years. In 2009, Sadka returned to England to set up his workshop in his hometown of Cornwall, where he currently works. Sadka’s bows have won numerous awards in international competitions, including the 2001 Bow Making Competition of the International Cello Festival in Manchester, England, and the 2010 Violin Society of America’s competition, in which he won three gold medals: one for each of his violin, viola, and cello bows.

From his vast research and experimentation, Sleeman has developed his own unique bow making methods for building modern bows influenced by François Tourte, Étienne Pajeot, François Nicolas Voirin, and Dominique Peccatte as well as replicas of historical models from the Baroque and Classical periods. His bows are owned by top string players throughout the world, including Mischa Maisky, Sergiu Luca, Pieter Schoeman of the London Philharmonic, and Liz Green of the Dutch Radio Chamber Orchestra. He currently works from Salon des Archets, his studio in Barcelona, Spain, where he performs restoration work, builds bows on commission, and oversees the production of a line of bows offered at more affordable prices.

French bow maker Jean-Luc Tauziede (b. 1962) is a native of Anglet in Basque country in France. He studied cello before beginning his training in bow making under Jean-Francois Raffin in Paris in 1992, and continued his studies with Stéphane Thomachot.

In 2001, Tauziede was featured in The Strad for an extraordinary bow he made named “Le Souverain,” an elaborately decorated bow mounted with 66 diamonds and a button fashioned into a crown of white and rose gold, valued at over $100,000.

Tauziede currently builds bows based on classical French models, as well as transition period and baroque model bows. His bows can be found in the hands of players across the globe. 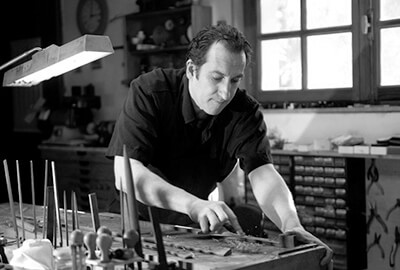 World renowned French bow maker Georges Tepho studied with Bernard Ouchard and Roger Lotte at the Mirecourt School of Violin and Bow Making. He has participated in expositions in Paris, Frankfurt, and Tokyo, as well as in numerous competitions, where his bows have won numerous awards.

He currently works at his shop in Quimper, France, perfecting his craft and mentoring up-and-coming bow makers. Tepho makes his own model of bow, influenced by the elegance of 19th century French bow making, as well as models inspired by the bows of Tourte and Pajeot.

His bows are in high demand among professional players. 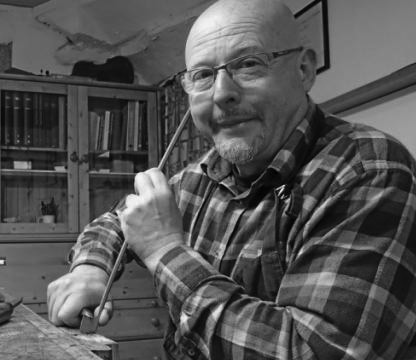 Young is also the author of The Steel String Guitar: Construction and Repair, one of the first and most important books on how to build a steel string guitar.

He currently builds, repairs, and restores bows from his studio in Longmont, Colorado.