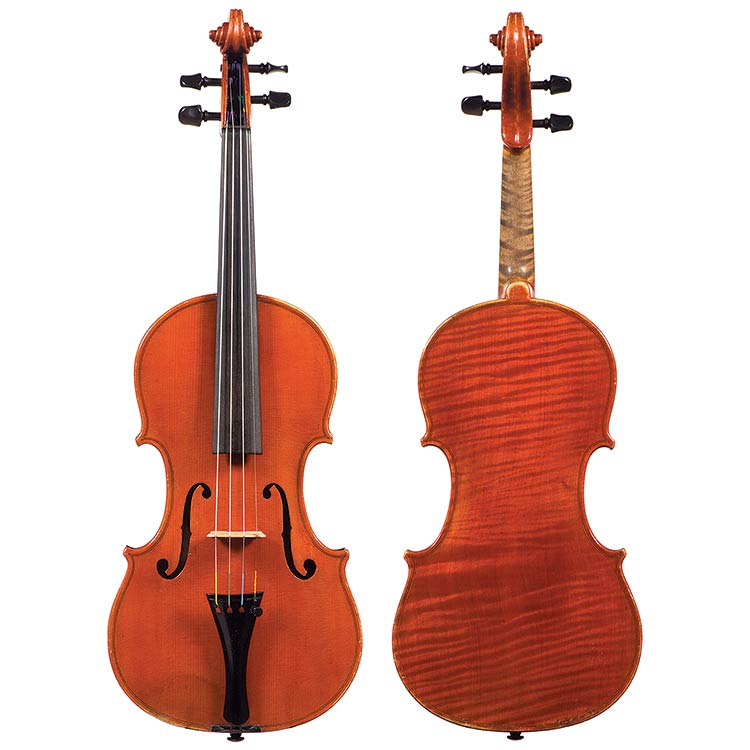 August Gemünder violin, New York 1885. Based on a model by Giovanni Paolo Maggini.

The celebrated Gemünder dynasty of violin makers began with Johann Georg Heinrich Gemünder (1782-1836), who served as the luthier for the Princes of Hohenlohe in Ingelfingen and Öhringen, Germany. The maintenance of the Hohenlohe family's collection of bowed instruments?which included a quartet by Stradivari?was entrusted to the Gemünder workshop, where Georg Sr.'s three sons, August Martin Ludwig (1814-1895), Johann Georg, Jr. (George 1816-1899), and Albert (1819-1885) assisted their father before pursuing their own careers. Among the earliest important makers to emigrate from Europe to the United States, all three Gemünder brothers arrived to the U.S. by 1847, bringing the high standards of European instrument making to early American lutherie.

After his father's death in 1836, August took over the Gemünder workshop, eventually moving it to Regensburg, before immigrating to the United States in 1846 with his brother, Albert. After running a piano and organ business for several years in Springfield, Massachusetts, August moved to Astoria, New York to join the workshop of his older brother George in 1859. In 1864, August established his own violin shop in New York City with his three sons, August, Jr. (1862-1928), Rudolph (1865-1916), and Oscar (1875-1946). August Gemünder & Sons grew to become the largest violin shop in Manhattan in the late 19th century, importing historical Cremonese instruments, publishing the monthly Violin World magazine, and serving the world's top string players. The shop also produced the "Gemünder Art Violin," a line of high quality workshop instruments violins imported from Europe "in the white" to the Gemünder workshop, where they were varnished and sold with great success. The Gemünder atelier existed in New York until Oscar Gemünder's death in 1946.